Christy here.  As many of you know, we took our first trip to Port-au-Prince Haiti early last month.  I apologize that it has taken me this long to tell you about it! 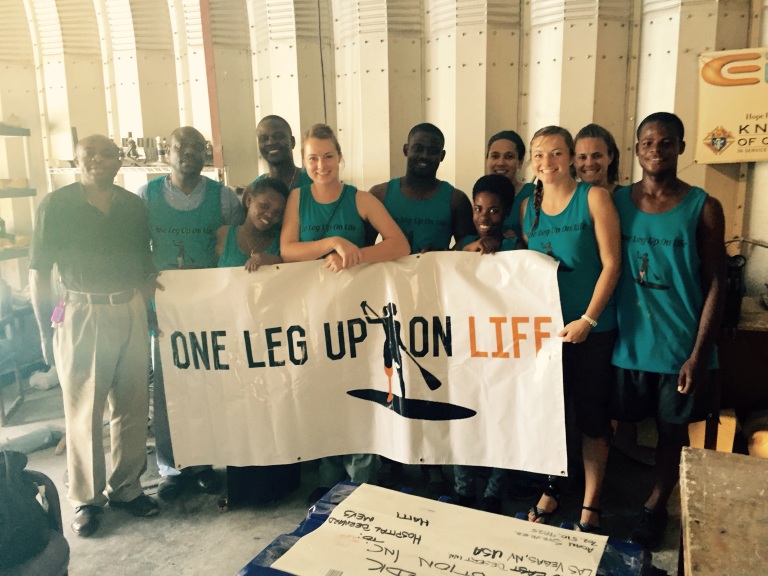 If you have read Jessica’s post, you might know that my trip did not start out the best in that in all my coordinating the prosthetic supplies and other things for the trip – I showed up in Miami without my passport.  Yes, yes, I know – how does a very experienced world traveler and Air Force pilot forget something so obvious, right?!  It was definitely embarrassing and then I had to drive 7 hours back to Georgia to get it.  However, its crazy  because this stupid mistake ended up saving our trip for a few different reasons.  First, I realized that night when I got home that the video camera we were going to do all our filming with was on the wrong settings.  Also, the sound on the Go Pro was not good enough for all the interviews I was planning to do in order to use in our PR campaign for the whole next year.  That night, I went to walmart and bought us a basic video camera for filming and fixed all the Go Pro settings.  After all these changes, I decided to also bring my computer so I could check the photos and videos after each day – which I had not had with me the first time.  Then two of our team got stuck in TSA (because of all the tools they had with them) so they missed their flights and didn’t end up making it at all.  They had 3 very large bags with all the prosthetic supplies with them.  Those ended up on the ramp in Miami.  Because I didn’t make my original flight – I was able to personally talk to the American Airlines people in Miami and after several hours of coordinating and phone calls we got the supplies switched over to me – and eventually they showed up in Haiti.   Had I already been in Port-au-Prince it would  have been 10 times harder to work all this coordination for our much needed supplies.  We were minus 2 team members for the week – but by wednesday had all our equipment!
So the trip itself:  It was amazing and stressful and tiring and hot.  Bernard Mevs hospital ended up being a great place for us to work!  We are excited to continue partnering with them.  They have a busy, functional hospital with our little prosthetic shop in a tin building on the roof.  They have nice living quarters with running water and delicious Haitian food every day for all the medical volunteers that come to work at the hospital.  Partnering with them makes those logistics so much easier.  We don’t have to worry about food, safe housing, security, transportation etc for anyone that comes on a trip with us!

We rolled in with the “A Team” – Jess and I, my physical therapist, Alicia and prosthetist Andrea.  Two Haitian prosthetic technicians that used to work in the prosthetic shop they re-opened for our trip (it’s been closed since October when funding ran out) worked with us all week too  – which was a great help! Jess, Alicia, and I joked that we became “Haitian prosthetic techs” as well for the week as we were helping our MVP Andrea make casts, measure limbs, paint sockets, etc .etc.  Of course as soon as we “opened up shop” people without arms and leg just kept showing up!   At first I was intimidated but as I talked to them – usually with Jess as an interpreter or with English if they spoke it – I realized I actually know a lot more about prosthetics than I realized just from doing minor fixes on my own legs.  I replaced a few cracked foot shells, examined knees, helped screw in pylons, sort through supplies, etc.  It was pretty hot in our little “shop on the roof” even with constant fans so I kept having to sit down and take breaks.  I have no idea how Alicia and Andrea and Jess worked so non-stop.  I’ll use my one leg as an excuse!

Our 5 kids came to the shop everyday and had to spend a decent amount of time just waiting around for different parts of the fitting process.  Alicia and I tried to keep them busy with daily work-outs, putting them to work sorting things or breaking plaster (Kevens especially loved this) or epic battles of bear-hunt. 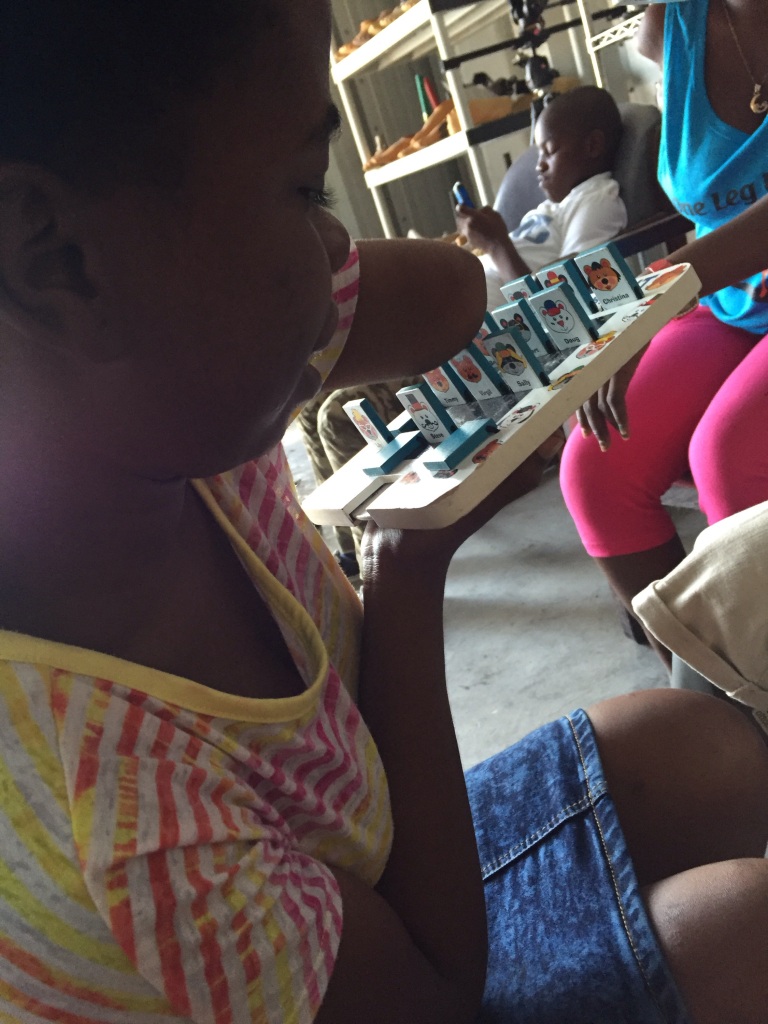 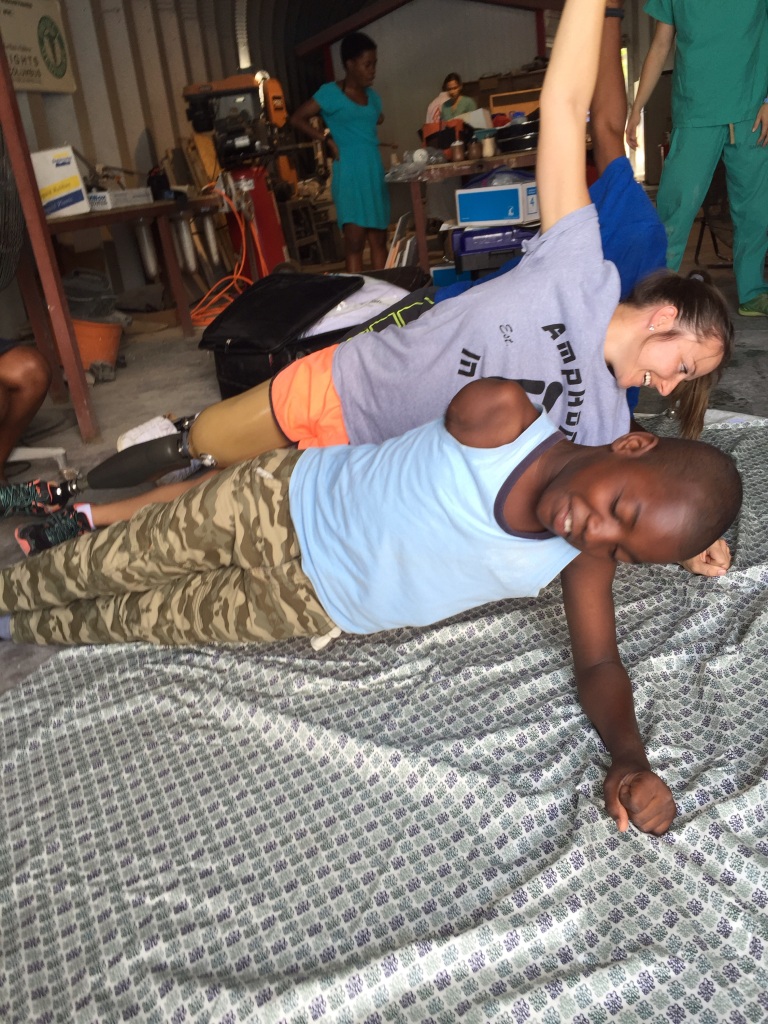 Even though I don’t speak Creole – by the end of the week I had all the kids facial expressions down.  Kevens kept rolling his eyes or we could tell he was unhappy doing certain things – getting casted, etc.  Each time I had Jess translate to him, “Hey buddy – I know this sucks – but I’ve done the exact thing you are doing right now”.  After we got Kevens his finished leg at the end of the week, Alicia had him doing all these walking drills and I did every one of them with him!  Alicia helped me with my walking and running all week. Hey, my walking isn’t the best yet, either.  I still have a limp sometimes.  (Oh and I selfishly – even though we were there for the kids  – had Andrea help me fix a few of my legs on our last night there-or her one night off! – I guess I’m just like the other amputees we saw all week – prosthetics need a tune up every once in a while – or at least less rusty screws in my case -too much scuba diving).

The kids were great and were always doing stuff with me – carrying my legs or helping me switch running blades, etc.  Jess called it “amputees helping amputees”.  Even though I couldn’t really talk to them with the language barrier -everyday we would start out with huge hugs and smiles.  I don’t think they’ve ever seen a white person missing a leg before!  They were so happy to see me and work out with me, etc.

Running with Kevens was my absolute highlight of the week.  We spent a majority of our time building his new leg and then it was anti-climatic when we finally got it to him.  This was something I should have expected.  Whenever I get a new leg, I don’t ever love it right away.  Usually it takes time to get used to and adapt to.  Kevens has been on a pretty unstable leg for the last 6 years, so of course he walks really slow and kicks his knee to lock it out every step. We only had about 1.5 days to work with him on walking on his new more reliable leg to get rid of these bad habits -so it was tough (a lot of eye rolls at Alicia – she says she used to it from all her patients – doesn’t  matter what country you are in).  So although Kevens seemed to like his new leg that we spent all week working on – no one “glory moment” or anything like that.  His running leg though – that was something that DID get immediate smiles.  We didn’t expect to get him a running leg this trip but were able to piece one together with his old socket, an extra blade that Wilfred had at his ex-wife’s house (a story in itself of how we kept teasing him to not be scared to go over to her house and get it), and some pylons we found in the back.  Kevens and I ran his first steps together!  He did great.  After not running for 6 years – he was tired but smiling.  Every start I would look at him, “Kevens, are you ready?”  “oh yessss”.  Every time.  Once he kicked me with his blade on my good foot so we both tripped and almost fell.  I started to slow down to stop, thinking he was freaked out about that and he says, “let’s go, let’s go, go!”.  Well, ok then!  After our first day of running, Kevens tells Jess, “I will be Flash tomorrow.  I will buy some speed so I can keep up with Christy!”.  oh man, it was so funny and cute! 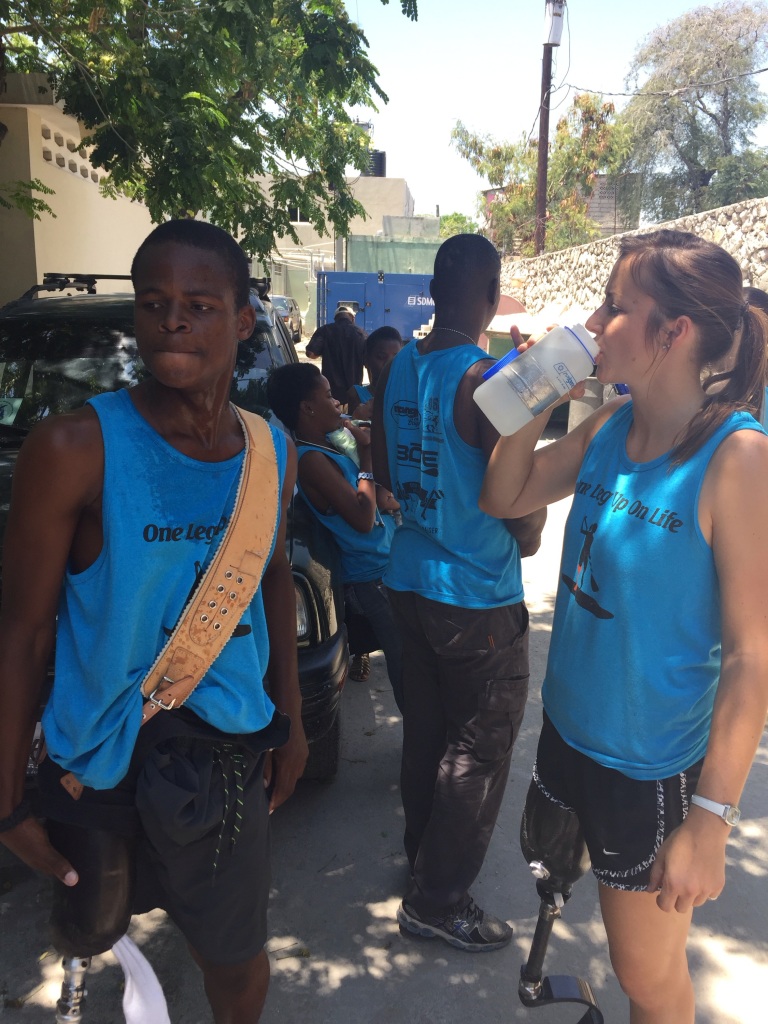 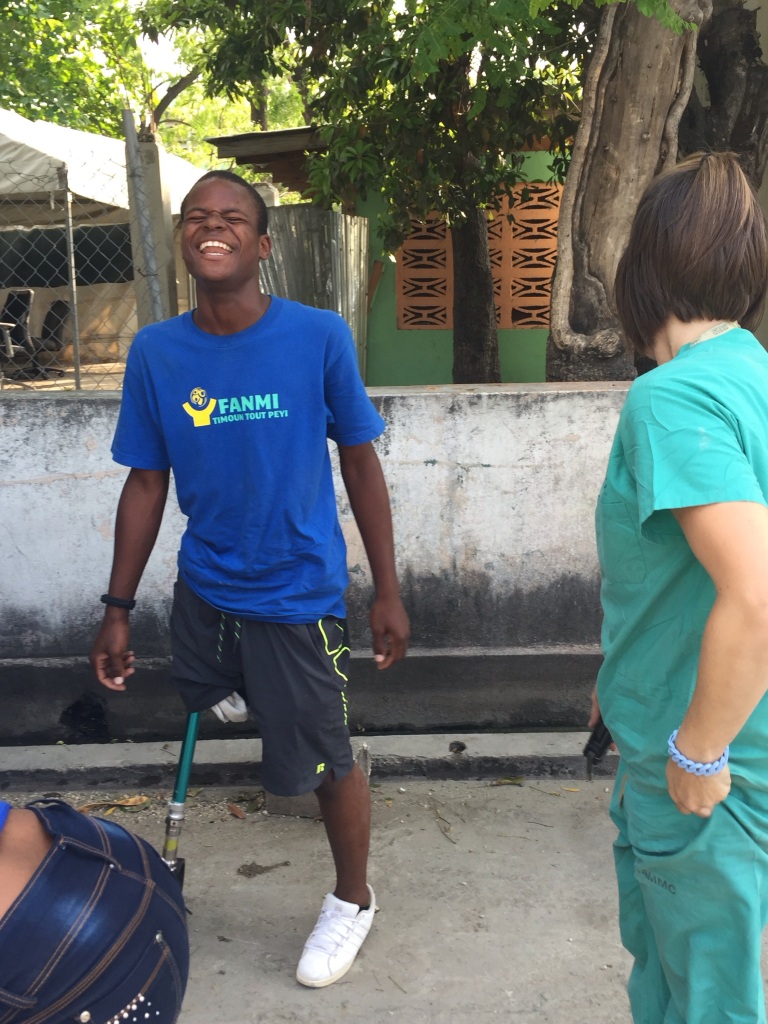 Our haitian amputee kids (Kevens, Luciano, Mikerline, and Wooderline) were just so great!  They completely won me over in our short week there.  Although the week was hot and tiring – I had the most amazing time with them.  Also, being on this trip with my sister and own therapist and a prosthetist that I knew during my rehab was special!  I can’t imagine a better experience.  Although I still don’t recommend losing a leg to anyone – haha (and if you are going to do it – BELOW the knee, please!) the week in Haiti was pretty incredible.  I still struggle and long for my two-legged life sometimes, but thinking of Kevens smile when we ran, or his Dad sitting in the chair all day just watching our work and nodding his head,  Mikerline and Wooderline giving me huge hugs every morning and Luciano helping me with whatever task or workout we could come up with – that makes this new life a lot easier!

Thanks everyone for your continued support and we are recruiting now for the next trip taking place in August!  Who wants to experience this with us? 🙂

One thought on “Haitian Adventures”